AMAZING DISCOVERIES IN EUROPE
YES, THERE ARE PYRAMIDS

"No ancient pyramids in Europe”, common belief of laymen and scientists alike.
Since 1999 this point of view has changed gradually. Starting with Thor Heyerdahls discovery of ancient pyramids on the Canaries. Followed by the discovery of unknown lavastone step pyramids in Sardinia and Sicily, stone structures in Greece and France and some suspicious hills here and there.
But the real breakthrough came with aerial photography and satellite imagery. Now the door was open to view colossal stone structures even under mountains and earth covered hills. What was denied at first and believed to be natural turned out to be colossal man made structures, completed by an unknown civilization, in an unknown period of history for an unknown purpose

YES THERE ARE PYRAMIDS IN EUROPE remarkable connections between the "pyramids" in Europe and Asia

red line connects Delphi – Denmark: according to ancient mythology god Apollo flew to the hyperboreans. In between (1/3 way) there are the pyramids in Visoko/Bosnia

Ever since my discovery of the fact that there are indeed ancient pyramids in Europe – long known ones as well as recently discovered ones – I tried to find a pattern or template for their positions within the so-called world energy grids. Neither one of those energy grids seemed to fit for all of the European pyramids. Some pyramid locations would fit into the Hartmann and Curry grids, others into the Flower of Life template and none of them of course into the so called “pyramid belt" of the 23rd latitude.
After I checked all the above mentioned theories, I stumbled over a rather strange map of energy lines: the “Synchronic Lines" discovered by the Damanhur society of  Valchiusella in Italy. This spiritual community claims to have found the “Dragon Lines“ of the Earth, which are invisible energy lines running roughly north/south and east/west, sometimes underground and sometimes in the air. Two or more line intersections form energy knots, where sacred places with pyramids or temples can be found. On two designated areas of our world there are intersections with 4 lines: in Valchiusella and in Tibet. According to the beliefs of the Damanhur community these places have the highest spiritual qualities. 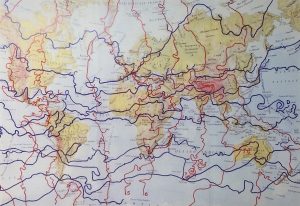 The "Dragon Lines" lines discovered by the Damanhur Society

This map shows no straight lines, but lines with crooked bends, 90° turns and even extensions to either side. There are 9 red lines running roughly north/south and 9 blue lines running east/west. They do not follow the meridians, nor are they electro-magnetic currents. They are a completely different system of lines known in Ancient China as the “Dragon Lines ".

When I compared this map to the European pyramid locations which we know of, suddenly all the European pyramids would fit into this pattern. Strangely both of the blue lines through Europe and continuing through Asia have many annexes or branches, just like branches of a river, feeding energy into the network. These line extensions can be found mainly between latitude 43° and 45°, from southern Spain through central Europe and as far as Eastern Russia – and this is exactly where the newly found pyramids are.
Now the even more stunning facts: under the assumption that this rather small map with its rather thick lines can be interpreted as a geographically correct sketch, all the recently discovered European pyramids seem to be on one single blue line, connected to each other. This line is:

•    coming from Iceland to Ireland + Scotland, through Stonehenge,
•    staying on 52° latitude until Saxony (Nebra/Sangershausen),
•    making a 90° turn south through Germany and
•    entering Italy from the Swiss Alps to the Montevecchia pyramids,
•    running south passing the Pontassieve pyramids, S.Agata pyramid is not linked,
•    crossing the Adriatic Sea and touching the ground in Croatia and
•    crossing central Bosnia with its pyramid valley in Visoko,
•    turning north to the Crimean pyramids and
•    passing Turkey near Bodrum and Gumusluk pyramid
•    then crossing southern Russia all the way to Vladivostok What a coincidence, what synchronicity to find all the newly discovered European pyramids connected on one single line. The already excavated pyramids on the Canary Islands can be found on another blue line crossing northern Africa, passing Malta with its immense megalithic temples and turning south to Egypt. The Sardinian and Sicilian step pyramids are connected to each other by the north-south running red line.

What explanation do we have, what answer to the fact that this map was published before 2003, which is before the Montevecchia pyramids first were noticed on aerial images and before Semir Osmanagic detected a pyramidal structure under a Bosnian hill? And why are the pyramid locations all on one single line instead of being placed within a net with lines and knots? What more surprises are there next to come?

For our German readers we have more links here:
www.geomantie.org/rb/aktuell/Freundeskreis_02_2004.pdf
www.esoterium.de/article.php?sid=1528

The construction of the 90° triangle with 3:4:5 ratio, known as the “pythagorean theorema"?, was long known before the Greek mathematician Pythagoras taught his knowledge to his disciples. In fact Pythagoras has not invented it but studied in Egypt and was reveiled the secrets of the “Holy Geometry"? there.
The 3:4:5 triangle was the basic formula of construction, from egyptian pyramids to gothic cathedrals throughout Europe.
It is amazing to see how easy a 90° angle can be built with nothing but a rope. Just take a rope, make 12 equal distanced knots and construct the triangle sides by dividing the rope into 3:4:5 knots.
This basic way of construction can be applied with any distance. Even distances on the globe. See how the Bosnian pyramids are connected to the Giza pyramids by a pythagorean triangle and holy geometry.

This maps is shown in the glass case on the plateau of the Bosnian Sun pyramid, explaining the connection between Visoko and Giza/Egypt by sacred geometry.

Side A = Giza – Visoko is approx.1200 miles, which equals 5 x 240 miles
Side B = Visoko – Lybian desert 4 x 240 miles
Side C = Lybian desert – Giza 3 x 240 miles
What does this pythagorean triangle teach us?
1.    We could find out if the 3rd corner of the triangle is indeed a yet undiscovered pyramid in the Lybian desert.
2.    Are the “knots of the rope" major sacred places?
3.    If so, is there a pythagorean triangle pattern behind the construction of temples and pyramids throughout the world?
4.    Who are the builders and what larger pattern did they apply?
5.    What was the purpose of their endeavor?
More questions come up as we try to solve the riddle. But step by step we unfold the secrets behind these mysterious constructions of unknown origin, time and purpose.